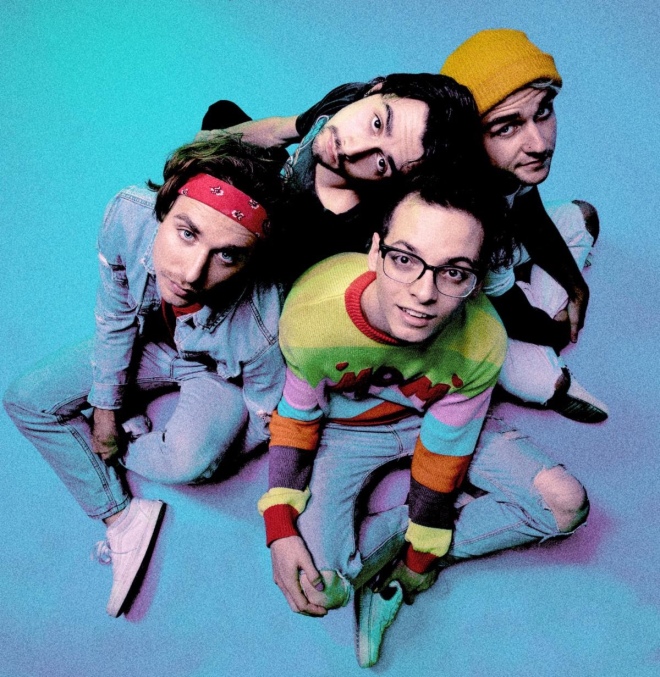 The Wrecks: live at Shag Chateau

The Wrecks, an up-and-coming American indie-band have tried out their take on Covid-19 approved gigs, a live stream. This digital way might be a boring take for some but that was certainly not the case for this band. From a remake of “That ‘70s show’s” intro sequence to jokes about “free foot fetish onlyfans” is the chaos their fans could expect before they embarked on the experience of what is known as The Wrecks “live at shag chateau”.

The American band played two sets on one day. You could buy tickets to see the full experience and get two unique gigs. Not only did they switch up their setlist and outfit, but the vibe was also completely different. The ‘70s theme was seen in both and also lead singer Nick Anderson’s quick-witted sarcasm made an appearance in the first and second set but apart from that, you could not compare the two to each other.

The earlier one started out on a chilled yet slightly awkward tone. They did not know how to create the energy the crowd usually produces but by the second set you would think that they absorbed the liveliness of a stadium performance. In both sets Anderson asks the viewers/crowd “to start a mosh pit in your living room” and as seen on the band’s Instagram,  people listened and took on the challenge.

For some who think that The Wrecks are only jokes and a fun time are wrong. The band is filled with talented musicians and lead singer Nick Anderson might have one of the best contemporary unpolished indie-voices. The uniqueness appears throughout all of their songs but the raw talent especially jumps out on  ‘This Life I have’, ‘Infinitely Ordinary’ and ‘Favorite Liar’.

For their seasoned fans, this was a reassurance of why they chose to spend their time and money on the band and for the new ones this was an opportunity to fall in love with The Wrecks and become more invested in them. The American band hasn’t had the chance to enchant us by touring in Europe/UK so this was a nice salvation. And although last Saturday night/Sunday morning was our first time to experience a “The Wrecks live show” it has made us long for more and now we are patiently waiting for the time that The Wrecks will travel over the pond in order to blow us away with their performances.

After an almost two-year-long wait, Nottingham-based trio Amber Run finally had their return back to the live stage and brought their astounding mix of indie-guitar riffs and soulful ballads to Camden’s Electric Ballroom. 🌟
These are some of the spectacular hits we've been loving these past few days and weeks.✨✨
It does not happen often that fans need an hour or even longer to explain the story of an album. But in the world of @twentyonepilots, that is as normal as the sun rising every day. From hidden messages to secret storylines and a not-so-fictional world waiting to be discovered - the new era of TØP serves as the peak of their musical storytelling and paves the way for what‘s to come. But not without leaving one or the other question mark. ☀️
It was a warm and quiet Saturday night in the middle of London when the Norwegian indie-prince Boy Pablo took the stage at St John-at-Hackney Church together with his ensemble of talented friends and family. 💜
While the summer is slowly coming to a close, it seems that the music industry is just starting up again, with countless heavenly tracks and exciting new albums blessing our all ears. 🤍
Ever since @camillelia stepped into the world of releasing music in 2020, the young up-and-coming artist has found her niche "early 20s identity crisis". This time around she is back with 'the other side' and is establishing her reign as an indie-pop starlet. ⚡️
%d bloggers like this: