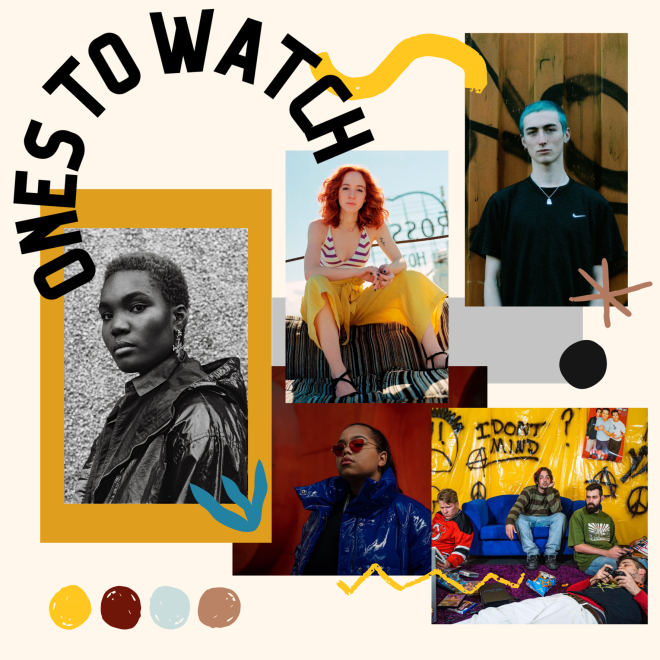 The disastrous year that was 2020 has come and gone and although 2021 hasn’t been able to eradicate the mess we are in just yet, we are hopeful. January, the first month of the year has provided a clean slate, with a year full of new music from the artists we have loved for ages and emerging acts we can’t wait to discover ahead of us. Here are some of the up-and-coming artists we are thrilled to support in 2021 and long after that.

Arlo Parks (born Anaïs Oluwatoyin Estelle Marinho) is a singer-songwriter based in South West London. She covers sexual identity, queer desire, mental health and body image in her lyricism with her sound bending between jazz, soul and indie.

Among the noise of a now predominately digital music industry, Parks has managed to carve a niche for herself that can be best described as confessional pop.

Parks tackles some of the heaviest subjects imaginable in her songwriting, she paints a devastating portrait of trying to help your friends through depression in ‘Black Dog’- aptly named after Winston Churchill’s metaphor for the illness. “I’d lick the grief right off your lips”, Parks shares an incredible gift with wordsmiths like Bob Dylan and Erykah Badu, her lyricism- accompanied with soothing yet emotional vocals- makes listeners feel seen.

2019 saw Parks sign with Transgressive Records, perform at Glastonbury Festival and embark on her first tour, supporting Jordan Rakei. In 2020 Parks went on to be named BBC Introducing’s ‘Artist of the Year’ and was recognised at AIM Independent Music Awards as ‘One To Watch’.

Parks is set to release her first album ‘Collapased in Sunbeams’ on the 29th January, which is already poised to be one of the breakthroughs of 2021. If Parks continues with the same honest vulnerability conveyed in her music so far, there is no doubt she’ll remain one to watch.

Since first launching onto the indie-scene in 2016 with their acclaimed debut EP ‘Indigo Club’, the eclectic South Australian quartet The Montreals have delivered back to back stand-alone singles oozing with their unique blend of California inspired rock, R&B and disco beats, all mixed to jangly perfection. After their singles ‘deadheads’ and ‘Sardines’ gained the indie-tick both national and international approval, the band has also been lucky enough to score support slots for some of the biggest names in the music scene, including Duke Dumont and Last Dinosaurs. 2019 then proved to be their ultimate breakout year, with their star-hit releases ‘Y2K’ and ‘Rude’, which earned them the support slot for the Red Hot Chili Peppers. With their latest endeavour ‘Horror Movies’, released last summer, the band effortlessly paved the way for a new chapter, perfecting their signature sleazy, surfy sound. Full of fun hooks, the track croons sexy bedroom vibes and incorporates “shitty GarageBand synthesisers and direct-input guitars with zippy, polished production” to keep their homegrown style “cartwheeling the line between polished and raucous”.

Now, after taking a break from making waves in the Australian and international musical cosmos – in line with the rest of the world – The Montreals are more ready than ever to make 2021 their year and soothe us all out of our quarantine slump.

Zoe Wees is a young talent that we definitely need to look out for this year! The 18-year old is a German singer and songwriter who released her debut single ‘Control’ last year which has already reached more than one hundred million hits on Spotify and has gained worldwide appreciation.

In the song, she sings about her struggles as a child and teenager having to grow up with benign rolandic epilepsy, which forced her to go through unpredictable seizures during the day. In an interview with Genius, the singer mentions how she’s already used to waking up, feeling anxious and not in control, knowing there would be another seizure that day. Feeling alienated and helpless as a child, Wees received support and comfort from one of her teachers who has helped her through that difficult time in her life. She also stated several times that ‘Control’ is her way of saying “thank you”to the ones that looked after her and expressing how much stronger she feels now.

Zoe Wees started her music career quite early as she performed at school concerts and participated in the German version of ‘The Voice Kids’ in 2017 where she fought her way through to the finals. In her Blind Audition, she performed ‘Get Away’ by Jessie J whom the singer denotes as one of her main musical influences, in addition to Lewis Capaldi. Wees has a very full, strong and raspy voice which might also reflect the sound of her musical idols.

Apart from her debut single release, another highlight of her career in 2020 is that she was chosen as the opening act for Sam Smith’s online concert in October. Considering that 2020 was Wees’ first active year as a singer and songwriter in the international music industry, we can see that her potential has been recognised and that she has achieved more in one year than some musicians do in ten years. Zoe Wees is a young, inspiring and empowered woman who spreads an important message through her lyrics and has an astonishing musical talent to offer the world.

Her Instagram biography reads “new music soon”, and we cannot wait to be part of her musical journey in 2021. The anticipation is real!

Born and raised in the cultural epicentre that is London, Tycho Jones has become the latest alt-pop addition to embark on his very own, unique musical journey. Over the past few months, the 20-year-old musician and creative from Hackney has steadily been drip-feeding us his music, with his debut EP ‘Tychonaut’ having been released in May last year and his latest single ‘Level Head’ giving us a first taste of his upcoming musical projects. Soundtracked by shape-shifting beats underlined by a lavish bed of crisp electronics that blend the worlds of trap, hip hop, and alt-pop into one, Tycho has already proven that he has come to stay, thanks to his playful, often very personal songwriting and stunning musical delivery. Influenced by the culturally diverse and fast-paced city he has grown up in, the singer sees London as a heavy influence on his music and himself, coining him as one of the most exciting acts to come out of the capital and for everyone to look out for in this new year.

The Regrettes’ lead guitarist Genessa Gariano has embarked on a solo project. ‘Hahaha’, her first single was released in the midst of the first wave of lockdowns around the world. Gariano who became known for being a founding member of The Regrettes strayed away from the eclectic music the band makes that ranges from pop-punk to soft spoken love anthems and created a rather soft, lo-fi indie atmosphere on her solo track.

Gariano who is a creative genius did the art direction for her own music video and created merch that was sold via her art and clothing brand ‘Growing Pains’. ‘Hahaha’ reflects the time we are living in perfectly, an ever growing case of non-stop anxiety with a slight hint of disillusion by way of coping. The topical nature of her music doesn’t alienate people that will listen to it in the years yet to come but will rather give off a remembrance of a time long gone.

Genessa Gariano is an artist that doesn’t shy away from the ugly truths whilst still allowing her overall presence to be seen as a warm embrace. And although we can’t wait for the return of new music from The Regrettes we hope that 2021 will also have new music by Gariano’s solo project in store.

Welcome to the fifth issue of GEM Magazine. The music mag a cut above the rest. 💎
Are you a fan of immersive digital exhibits and are planning to go to Amsterdam soon? Then we have the best spot for you to go, Moco Museum and its wonderful 'Digital Immersive Art exhibition by Studio Irma x Moco'. ✨
From being a TikTok star to becoming a poppunk artist in his own right, @jadenhossler has done it all in the space of one year - the culmination of his hard work was seen at the Roxy Theatre last Saturday night with a special live(streamed) performance, and to recapture this star's first live gig click on the link in bio to read our review. ✨
@willowsmith has been shaking up the world with her fourth album 'lately I feel EVERYTHING' as she celebrates the pop-punk genre and has been a revelation to the music industry through her immense talent and genre bending music providing us all with comfort and joy. ⚡
In a world that has been dreary for far too long, it’s no surprise that many people have been wishing for things to change, for a miracle to come their way and put everything back to its rightful place. That is exactly what Nothing But Thieves’ latest single ‘Miracle, Baby’ is all about – an urge for the present to become a bit more colourful, brighter. And while the song starts off brutally honest and rational in the alt-group’s typical manner, it can’t help but leave a hopeful aftertaste. ✨
Another New Music Friday filled with hits from start to finish. The up-tempo, sensual ‘Heaven Angel’ gets counteracted by @bigredmachineadjv ’s ‘Renegade’ whilst @sam_fender ‘Seventeen Going Under’ is on a self-reflecting planet by itself. And as the summer is going along nicely and the sun-filled days are spent listening to music and with the laughter of friends – we hope that this list is yet another addition to your evergrowing playlist. 💖💖
%d bloggers like this: