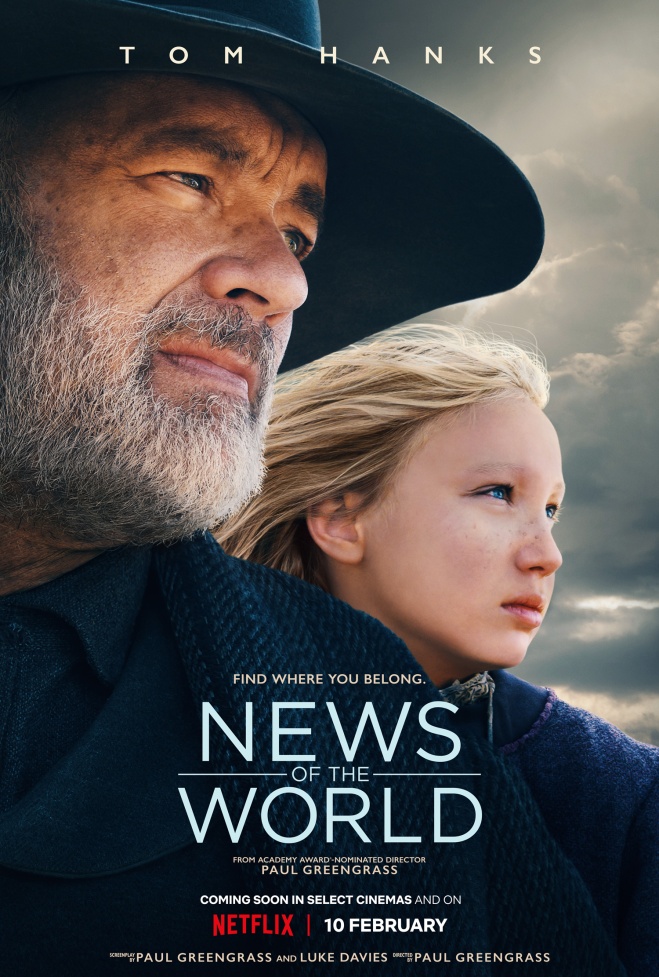 Movie Review: News of the World

The Western drama ‘News of the World‘, directed by Paul Greengrass was released on Netflix on February 10th after its theatrical release in the US on December 25th. The movie was named one of the best films of 2020 and received many positive reviews from critics.

The movie is based on the book of the same title written by Canadian author Paulette Jiles. In 1870, Civil War veteran Captain Jefferson Kyle Kidd (Tom Hanks) finds the 10-year old orphan Johanna Leonberger/ Cicada (Helena Zengel) – who was raised by the Kiowa tribe after her parents were killed – in the woods. He makes it his mission to return her to the remaining family, which marks the start of their long journey through the Texan wilderness.

What do we expect from a Western? Action, drama, violent confrontations and of course, horses. The movie employs all of these features but not to the extent one might assume. The shots capture the impressive wide landscape which the soundtrack music composed by James Newton Howard underlines. Surprisingly, the movie gains its power through suspenseful scenes and deeply emotional interactions often accompanied by simplicity and silence. Johanna only speaks Kiowa and a few words German, and Captain Kidd only speaks English – it makes their way of communicating very unique. They manage to build a caring and heart-rending relationship without being able to communicate properly through language. The authenticity of the costume designs and the rebuilt villages invite the viewer to be part of their adventure.

The 12-year old German breakthrough actress barely speaks in the movie but transmits her emotions through compelling gestures, mimic, and other reactions. Hanks has emphasised the extraordinary expressiveness Zengel’s eyes have. For this talent, at such a young age Zengel has been said to even overshadow Hanks in the movie and received four award nominations in the past weeks including one for the Golden Globe Awards and the Screen Actors Guild Awards. Zengel started learning the Kiowa language a few weeks before the filming in New Mexico began and visited the Kiowa tribe to learn more about their culture. In several interviews, the young actress emphasises that it was very important for her to learn about the culture directly from the members of the tribe and communicate with them through a translator to know how they want their culture to get represented. However, one should be critical and keep in mind that this movie is a Western representation of Native American culture.

From a filmmaking perspective, this movie is a raw and emotionally powerful piece of art. It is not what you would expect from a Western drama. The suspenseful and quiet scenes can be nerve-wracking as they seem very realistic and let the audience be part of the tension the characters endure. The silence reflects the simplicity of some scenes, and sometimes, one might think to be able to hear their own heart beating. This movie is recommendable for everyone who seeks to escape reality for 118 minutes.

Welcome to the fifth issue of GEM Magazine. The music mag a cut above the rest. 💎
Are you a fan of immersive digital exhibits and are planning to go to Amsterdam soon? Then we have the best spot for you to go, Moco Museum and its wonderful 'Digital Immersive Art exhibition by Studio Irma x Moco'. ✨
From being a TikTok star to becoming a poppunk artist in his own right, @jadenhossler has done it all in the space of one year - the culmination of his hard work was seen at the Roxy Theatre last Saturday night with a special live(streamed) performance, and to recapture this star's first live gig click on the link in bio to read our review. ✨
@willowsmith has been shaking up the world with her fourth album 'lately I feel EVERYTHING' as she celebrates the pop-punk genre and has been a revelation to the music industry through her immense talent and genre bending music providing us all with comfort and joy. ⚡
In a world that has been dreary for far too long, it’s no surprise that many people have been wishing for things to change, for a miracle to come their way and put everything back to its rightful place. That is exactly what Nothing But Thieves’ latest single ‘Miracle, Baby’ is all about – an urge for the present to become a bit more colourful, brighter. And while the song starts off brutally honest and rational in the alt-group’s typical manner, it can’t help but leave a hopeful aftertaste. ✨
Another New Music Friday filled with hits from start to finish. The up-tempo, sensual ‘Heaven Angel’ gets counteracted by @bigredmachineadjv ’s ‘Renegade’ whilst @sam_fender ‘Seventeen Going Under’ is on a self-reflecting planet by itself. And as the summer is going along nicely and the sun-filled days are spent listening to music and with the laughter of friends – we hope that this list is yet another addition to your evergrowing playlist. 💖💖
%d bloggers like this: