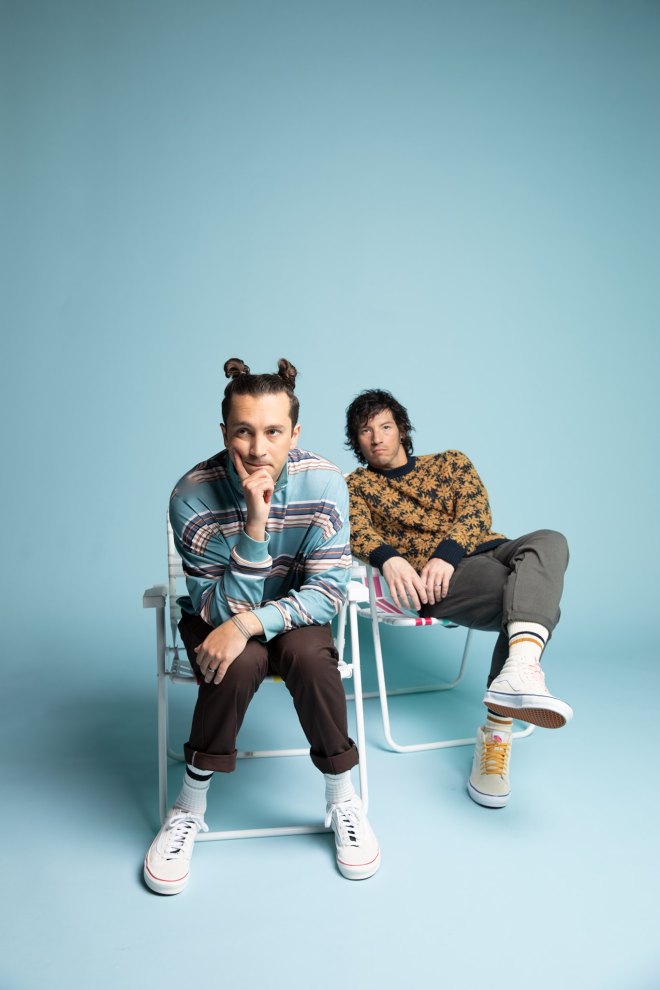 Shy Away: How Twenty One Pilots broke the fourth wall

When you become part of a fandom, you have a few expectations of how the journey is going to go. A few teases, then the single, next an announcement of the album and future tour dates to put the proper cherry on top. All of it gets handed to you by the artist, all you, the fan, need to do is wait, see and enjoy. When I stepped into the Twenty One Pilots fandom, the clique, in 2016, I was expecting just that – easy involvement, some nice friendships and awesome music to top it all off. Boy, was I wrong.

Now, many years, a couple of albums and countless amounts of live shows down the line, I know better. Twenty One Pilots aren’t your usual band, they don’t just release a single and then announce the album like that. No. They make you work for it. Looking back, the story that started with their first album ‘Blurryface’ in 2015 and that has now found a new, more real home than anyone ever anticipated, could easily be written down and turned into a book. Or maybe even a whole tv series (Netflix, I’m looking at you). First, we met Blurryface, the dark side of lead singer Tyler Joseph’s mind, then ‘Trench’ introduced us to this new world called Dema, which is ruled by the Bishops and the celebration of vialism (a religion that celebrates suicide), and we also came across a character named Clancy and a group fighting against this dark new place, the Banditos, aka the fans. While the album in itself tapped into themes like the glorification of suicide in the world of glitz and glamour, mental health and Tyler’s all enduring love for his wife Jenna, it also served as a script for a storyline that has now finally reached its third act with their new single ‘Shy Away’ and their upcoming album ‘Scaled and Icy’. And while the song might just sound like a poppier version of what we are used to hearing from Twenty One Pilots to the casual listener and the colour palette may be a lot more vibrant than their usual dark selves, the clique, the group of fans that have been paying attention all this time, knows: there is more to this release than what first meets the eyes and ears.

2020 was a rather quiet year for Twenty One Pilots. They released ‘Level of Concern’, a song that introduced the world to a new era of sound for them, and ended the whirlwind of a year with their very own Christmas song, a sudden surprise for just about everyone, even the band itself. But in the midst of it, there was also this AR online treasure hunt – a chaotic roller coaster of hidden codes, cryptic messages and a worldwide community coming together to serve a massive puzzle that ended with the release of the longest music video of all time. For everyone taking part, myself included, it felt like a fun game to take everyone’s minds off the monster made of dread and darkness that the year had become thanks to the pandemic. But as we know now, this is when it all started.

What’s most important to understand is that Twenty One Pilots don’t just do things without adding a layer of cryptic information and hidden messages to them. Just about everything is either a sign or a detail that puts us a step forward in the storyline. So, naturally, the fans are always on the lookout for anything to happen, change or suddenly appear out of nowhere. This time, it began with the slow, but steady desaturation of the band’s header on Twitter. Week after week the colours faded until there was nothing left of the vibrant red that had been there before, and even the beloved symbol of the band had to go in the end. Suddenly questions started to appear. Are they going on a new hiatus? Will we get a new symbol? Will the header start moving towards blue? What does it all mean? A few days later, we got our answers, this time from Clancy himself (a website named dma.org had appeared in line with the release of ‘Trench’ and had since then been the place for Clancy to contact the world from inside of Dema): apparently, he had been caught and lost all hope. A few hours later the website got taken over by Dema itself, the Bishops had found it. And with it, Clancy. And what seemed like an end to the character, turned out to be only the beginning.

If organisations like the FBI or the CIA ever wanted to take on new members for their teams, they would only have to take a look at the talented individuals who are part of fandoms. Within minutes, the new dma.org website had been taken apart by the fans and all of a sudden posters and messages were discovered, promoting ‘Scaled and Icy’ (funnily enough an anagram for “Clancy is dead”). And you might think now that the fandom suddenly burst into excited screams and colourful fireworks, but no. There was something off. This had been too easy. And then there was also this sponsorship by the Dema council, the one place that we had been taught to not trust under any circumstances. But now the album, the single and the live stream planned for the 21st of May were being organised and put out by Dema. Had Tyler and Josh been caught? Was this what had been behind the strange messages during the AR game? It was still Twenty One Pilots releasing new music, but this didn’t feel right. Nobody knew what to do.

Within hours after that, posters and ads started popping up all around the world. London, Berlin, Chicago, you name it. The sign of the sai (a weapon, but also an abbreviation for ‘Scaled and Icy’), that looks very similar to the “east is up” symbol we had been introduced to in ‘Trench’, was plastering walls and the old symbol with its lines was nowhere to be seen. Shortly before that, a zoomed-in picture of the cover for ‘Christmas Saves the Year’ had taken over online, depicting a message written on the wrapped parcel in the cover’s background: “SAI is propaganda”. The gift had been for Clancy. And that’s when we knew it had happened – Dema had taken its message to the real world. Twenty One Pilots had finally taken the final step. They had broken the fourth wall.

For everyone who had followed all these events over the course of the past few days, the release of ‘Shy Away’ came as no surprise. We had known all along that it was coming, even without the band ever saying a single word. Strange Twitter profiles had suddenly appeared, the Blurryface account was active again after over three years. Everything was pointing at a massive event to go down. And then there it was – the new single, with a new music video to go with it and a completely new look. That’s when the clique finally broke out into the chaos of excited, frantic screams and pink and blue coloured confetti. Even the one or another happy tear found its way down a cheek. The boys were back. Finally.

As the second song to ever be written on a guitar for singer Tyler, the record sounds a lot more pop-ish and indie-like than most of their previous releases. A colourful firework of addictive drum beats, electronic rhythms, a striking guitar to lead the way, and stunning vocals from Ty himself, the track serves as the perfect start of this new, saturated era of Twenty One Pilots. Recorded in their home studios, completely separated from each other – Tyler sitting in Columbus, Ohio, with his wife and baby girl Rosie, who actually is the first person whose voice we get to hear on the new single (listen closely at the beginning), and drummer Josh hanging with his wife Debby Ryan in sunny California – the record and also the upcoming album serve as a step back to the band’s beginnings, back when they were as DIY as they could get. And backed by splendid visuals both from the album cover, the newly released merch and the stellar ‘Shy Away’ video (directed by Miles Cable & AJ Favicchio and filmed at the end of March in Tampa, Florida), it is clear that Twenty One Pilots have got a lot more in store than what it might seem like.

So, what do us fans think? Imagine the meme with the cartoon dog sitting in a burning house, drinking tea and saying “this is fine”. That’s what being a Twenty One Pilots fan, a clikkie, feels like right now. We know we shouldn’t trust this release. We shouldn’t trust anything that has the support from Dema, especially now that the narrative has found its way into the real world. But will we always remember this release day as one of the happiest moments the fandom ever got to experience? Of course we will. On the other hand, ‘Scaled and Icy’ could potentially be a very real propaganda album. We just don’t know yet. Are Tyler and Josh stuck in Dema? Is the live stream the bishops’ way of luring us all in or will it show the band breaking free from the chains? Will there be a second album? And when will we finally get the missing puzzle pieces to this story? Nobody knows. What we do know is that Twenty One Pilots just released a phenomenal new song that is the start of a new era that will be unlike anything we have seen before and everyone should all go and listen to it right now. Just don’t let the Bishops get a hold of you.

Twenty One Pilots’ new single ‘Shy Away’ is out now and their upcoming album ‘Scaled and Icy’ will be out on the 21st of May via Fueled by Ramen.

ICYMI 🙌 @lanadelrey released her 7th record last month and to celebrate her most vulnerable album yet, we reviewed it.
@taylorswift has used her magic to catapult us back to 2008 and at the same time making us swoon in her universe of teen angst, heartbreak and unapologetic joy. 🌟
Twenty One Pilots are back. 💎
Another week, another Friday. This time one celebrated by many, some are jumping for joy because another holiday is on the horizon – Easter, some because they are experiencing a long weekend and some are even seeing the end of lockdown coming closer. To revel in all of this positive energy we made a list of our favourite tracks of the past week. Topping our reviews is newcomer @oliviarodrigo who is making her mark on the world but you will also be able to find new additions of former Disney star turned pop star @dovecameron, indie-pop band @halfaliveco, songwriter/popstar @juliamichaels and @wearecassia. 🌟💖
Steve Rogers and Tony Stark are gone, and with the world still torn into pieces after half of its population was suddenly vanished by Thanos’ snap for five whole years, the two newest additions to the Avengers, Sam Wilson, aka Falcon, and Bucky Barnes, aka The Winter Soldier, like so many others are grappling to find their place in this new post-Blip era. But if that wasn’t enough, the fresh heroes are also facing some additional problems: radical conspiracy groups thinking everything was better before the Blip, having to work with old foes, and a new superhero wearing a familiar suit. 💪🏻🇺🇸
Click on the link in bio to read more about Van Gogh: The Immersive Experience. ✨
Loading Comments...
Comment
×
%d bloggers like this: