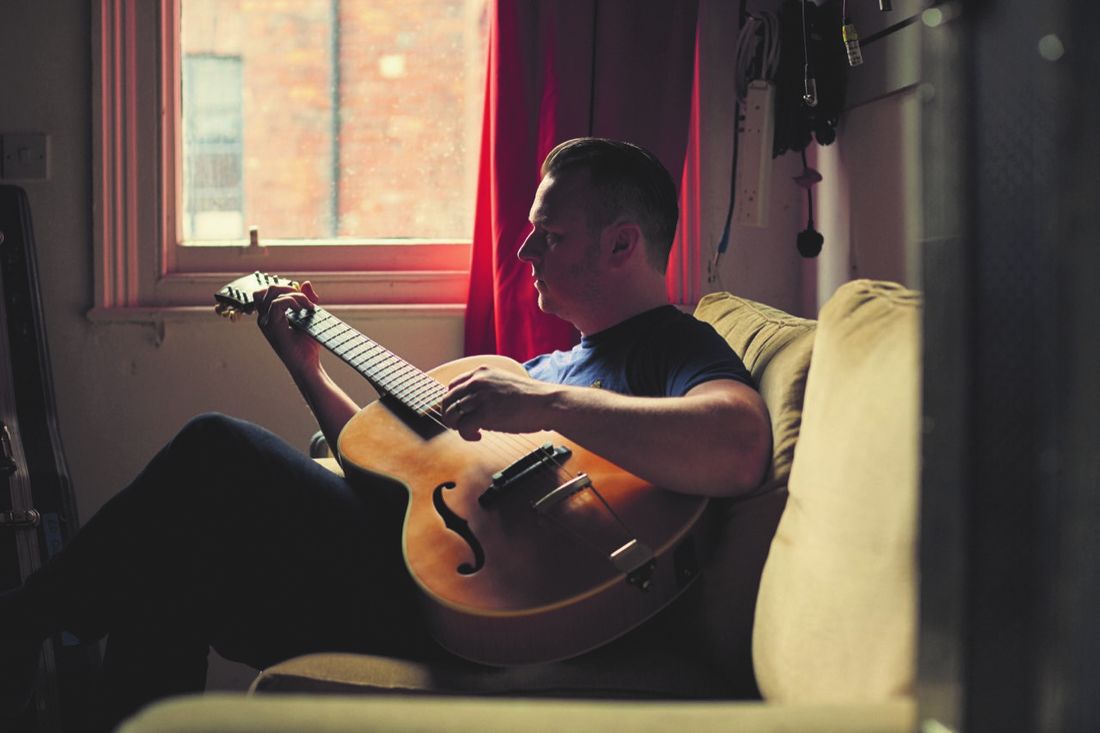 In the midst of the second lockdown, we were lucky enough to sit down with Ed Cosens, who a lot of people might know as the guitarist from ‘Reverend and the Makers’ for a chat via zoom. Ed has released the singles ‘if’ and ‘the river’, the album ‘Fortunes Favour’ will be out beginning of 2021.

Q: With everything going on, lockdown after lockdown. How did you stay busy?

A: Well, I think during the beginning of the first lockdown, obviously no one really knew what was going on and everything that was planned got rescheduled. At first, a lot of people thought the shows planned for the end of 2020 could still happen, that took a turn. I tried to stay busy. I did an acoustic series online, covering my favourite songs. It took me back to when I was in bands in school where we would always play covers. For me it was a great experience, deconstructing songs other people have written without having the same pressure you get from releasing or performing your own material.

Q: What was the motivation for you to write a solo record?

A: It’s something I’ve been thinking about for 10 years. I guess for me it was a combination of finding the right time to do it around the band and also finding the confidence to make a record that I would think is good enough. We had a certain amount of success with the band, especially at the start when we were alongside bands like ‘Arctic Monkeys’ and ‘Milburn’ from Sheffield. It took some time for me to really determine whether the music I was making was good enough. The last few years I have found the sound I was looking for and the belief for what I was doing. In the end, everything just fell into place, so this was the time to put me out there.

Q: You mentioned the solo record is a project that has been on your mind a long time already? What idea did you have in mind in regards to you as a solo artist or your sound?

A: ‘If’ is the oldest song on the record, it was written a few years ago. It was the first time I sat down and thought alright this is really good, I’m really happy with that song. It’s often one song that sticks and allows you to develop and explore that further, which leads you to a certain sound. For me, that’s how it happened in regards to the sound of ‘Fortunes Favours’.

Q: How would you describe that sound?

A: If you’re familiar with ‘Reverend and The Makers’ where especially the last few years I wrote quite a few songs for, you can hear little bits which sounds similar to ‘Fortune Favours’. Mainly because it’s me singing them, which was a different sound for the band anyway. I would say the album is a development from those songs and taking it a bit further, as for my solo record I could fully make my own decisions. I was able to express what I was and still am really into. I am a huge ‘Beatles’ fan and sound wise I think people like ‘David Bowie’ and ‘Richard Hawley’ inspired my sound.

Q: What was the main inspiration behind ‘Fortunes Favour’?

A: It’s very much about all my experiences in life, growing up, getting a little bit older now and having a family. Different scenarios I have been through with the band that impacted my life. Lyrically it took me a minute to get my head around with the writing process, writing the songs just for me. In the band, it was usually Jon who wrote the lyrics, so it took some practice. Being able to write about your personal experiences for me is a really powerful thing, it gives you lots to talk about. Being in relationships, falling in and out of love, friendships, all those things you look back on when you get a little bit older. The title ‘Fortunes Favour’ comes from a song on the album, for me, it has two meanings. One is about the frustrations in life, especially within the music industry. The other has more to do with my personal life and being happy with the person I am today and taking from that.

Q: Why did you choose ‘if’ as the first single to release?

A: The reason that ‘if’ was the first single to release is mainly because of the short film that we made with the album. I thought a lot about how to present the album and the songs visually, trying to make it a bit more interesting and different. There are so many music videos out there that are not necessarily correlated to the song and lyrics, I wanted to combine the visual with the music in a way that they are connected. For me this is why naturally ‘if’ was released as my solo debut.

A: I’ve been writing for the past two or three years, I haven’t been writing with other songwriters, it’s just been me. The actual writing just comes from me sitting down with my acoustic guitar. When we went into the studio’s the only thing we had was a load of acoustic demo’s, which allowed me to be very creative with bringing the music alive. For me the writing process usually starts with a melody or a few chords, me trying to make that into something, bits of lyrics coming to mind and after filling in the blanks. However, it can differ, for example, the lyrics on ‘the river’ came first to mind when I was walking alongside a river and made up a melody later when I got home.

Q: Was the recording process very different from your solo record than it usually is with the band?

A: Yes, it was in a way, I wasn’t as much the leader in a lot of ways, obviously there are a lot more opinions in a band so you don’t often get the final say. For the solo record, it was quite strange that I was the one calling the shots. It was quite nice, it felt very free and open. With the band, the songs were a lot more thought about, which becomes a different process.

Q: What is your favourite track from the album?

A: It’s a difficult one, I obviously like them all. I think I’d have to say that ‘The River’ and ‘Fortunes Favour’ are my favourites. Because I think they, mean quite a lot to me especially in regards of the lyrics and they were songs that just came together very nicely in the studio, the sound and the feel of them both. However, they all have different meanings and different feelings which makes it hard to choose.

Q: What are the plans for the future? Would you like to continue makings solo records or is your main focus going to be with the band?

A: I’d like to think I can do both, I’m certainly not done with the whole solo thing yet. It was never the intention to just make one record, I would very much like to make another one. I have started writing songs that in my head could easily make up a second album. But obviously the band is still very much an active thing, at the moment we’re sort of toying with the idea of getting back into the studio. So hopefully both can complement each other.

Q: What does music mean to you?

A: A very big one. What does Music mean to me? Music is everything to me. If you try to think of a world without music or a life without music in it, you just can’t. It’s not only music but art in general. If you didn’t have music to express yourself or connect to songs other people have written. Music helps you understand, when you are going through difficult times, but also help you enjoy happy times. It really is life for me. Without music, I wouldn’t have had my wife, my family as it is. It may sound like a general answer, but it really is everything to me.

Especially now during the lockdown. Imagine going through a situation like this without the arts. Without music, books, films, the world would be a horrendously bleak place.

His new single ‘The River’ is out now.

Fortunes Favours will be released in early 2021

Being in your 20s is tough. There’s falling in love with the wrong person, growing apart from the people you used to call your best friends and the grand task of deciding what you want to do with your future and life. 🫠
Two years after their magnificent debut @wearethewrecks are back with their sophomore album ‘Sonder.’ Out everywhere tomorrow, go check out our review today to prepare yourself for the indie-rock album of the summer. As energized and vulnerable as ever ‘Sonder’ is everything you knew The Wrecks to be and more.
It’s been over two years since Harry Styles last gave the world a taste of his musical expertise. With his third studio album, the young pop-king seems to have fully grown, feet firmly planted into his own musical world, which he invites everyone to explore. Discussing topics close to everyone’s hearts, it’s a record packed with love, intimacy and personal growth. 🏠
“You can’t be making your art for other people to like it. Because at the end of the day, there are always going to be people that hate it, there are always going to be people that love it, you just need to find the community that loves it and wants a share in that joy with you,”, states @scarlettmtaylor when talking about her take on today‘s music industry.
In times of Covid-19, countless lockdowns, album and single pushbacks and the ever so prevalent pressure to always be on top of your game no matter what, it hasn’t been the easiest mission for musicians all around the world to keep up a happy face and deliver their best. When the whole globe lunged for artists to keep it entertained, a lot of them turned away from the countless eyes watching them to get some weight off their shoulders. 💥
What does being a musician in this day and age mean? In a world that demands everything to be faster, better and easier to access, does real artistry really have to be just that? Or is there a way to find longevity, your own self and true freedom within the chaos? 🌪
Loading Comments...
%d bloggers like this: